Endermologie® was developed by Louis-Paul Guitay (LPG) in the early 1980s when it was originally used in the treatment of burns to prevent skin contraction and to loosen scar tissue. During these initial treatments it was noticed that it unexpectedly improved the appearance of cellulite in some patients and as a consequence Endermologie® became widely used for aesthetic purposes in France and the USA.

This unique revolutionary treatment is now used in over 70 countries by over 70,000 women daily and has been endorsed by over 3000 plastic and cosmetic surgeons and dermatologists. It is the only treatment approved by the American Food and Drug Administration (FDA) as a temporary cellulite treatment. 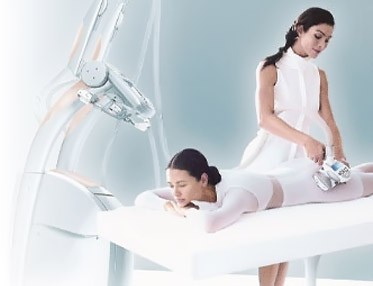 Endermologie is a non-surgical treatment used as a toning therapy for cellulite and post-operative liposuction amongst other conditions. To date, no other method has been found to reliably and consistently reduce the appearance of cellulite as effectively as endermological massage. Cellulite does not respond well to weight loss, exercise, creams or even surgical liposuction and is therefore why endermologie is the only Cellulite reduction method approved by the American Food and Drug Administration (F.D.A.). Treatments are performed by trained therapists, with a hand-held, massaging head that intermittently rolls - over and sucks the affected area and kneads subjacent soft tissue. This unique combination of gentle suction and deep reaching massage is applied to the affected areas in a manner that cannot be replicated by any other treatments. (Patients have described the experience as relaxing - much like a deep body massage).

Whilst a precise reason for the success of this system is not yet fully understood, it is thought that it works by physically stretching, and therefore loosening, the interconnected web of fibrous tissue which tethers the dermis (or connective) tissue to one another. By softening the bonds between these strands and - it is currently held - by stimulating the circulation beneath the skin, the process subsequently eradicates any unsightly dimples. By generating a massive surge of oxygen and blood to affected areas, the treatment mimics the behaviour of your body's healthy tissue, thus increasing the lymphatic drainage of stagnant, toxic waste within the system. Furthermore, extensive medical research has conclusively revealed that - in addition to the arousal of deep circulatory activity - endermologie also increases levels of collagen within the skin: it is the combined action of these several factors that ultimately results in a significantly tighter, smoothly contoured body.

We invite you to feel and look your best!

Please call us today for more information and to schedule your appointment or tour of our centers.